Networking tip: Join in to benefit when you join up 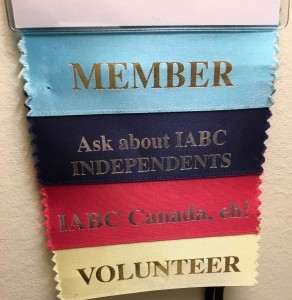 In a post on his new blog More with Les (there, you see? I’m not the only one new to blogging), well-known International Association of Business Communicators (IABC) guru Les Potter, ABC talks about the importance of professional association membership to a career in communication/PR.

There are reasons it’s extremely important to those of us who are entrepreneurs, too.

I, too, belong to IABC, and at one time part of the now-defunct local networking group, Communicators Connection (formerly the Halton-Peel Communications Association or HPCA).

Both groups are important to me because as an entrepreneur, I spend lots of time in my own company. Generally, this is fine. There is nothing like a deadline to focus and occupy the mind, so I tend to work without being distracted (except occasionally by other people’s blogs and the treasure hunts they can lead to!).

But sometimes I need to get out of my home office and meet and talk to people.

IABC has two special interest groups that speak directly to me. One brings together fellow independents (at one time called the Alliance of Independent Practitioners, now Professional Independent Communicators). The other, IABC/Toronto Westend, is a mix of communicators who are connected by geography — we all live or work (or both) outside the downtown Toronto core.

What makes networking with these groups especially fun is that I have been very involved in them.

With both HPCA and PIC, I’ve been on their boards, produced a newsletter, helped organize meetings and more. The Westend group is much less structured, but I’ve also organized social outings, maintained a contact list and circulated information to the group.

When I was one of the organizers, I knew the names of everyone, so instead of going to an event feeling that I wouldn’t know anyone there, I went in looking forward to putting faces to names.

Warm networking is one more good reason, added to all of the ones Les listed, to get involved in professional associations. Try it!