This week in customer DISservice… 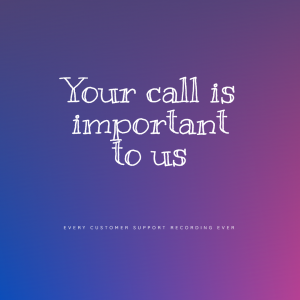 Here’s another tale from the customer service (or should I say, disservice) files, this one from my internet service provider.

I was away for five days, and I mean AWAY — no laptop, tablet, not even a cell phone. My voice mail message was clear that I was out of the office and not often checking for messages, and there was only one message waiting when I returned.

Of course, there were 79 assorted e-mail messages, which I downloaded the night of my return and scanned through checking for urgent ones before turning off the computer and going to bed.

The next morning (insert dramatic music here) — no access to the internet.

I tried all the usual tricks of turning the modem off and on several times and restarting the computer. Not having any luck, I called my service provider, Sympatico (Bell).

Is it just me or have you noticed that tech support people seem to have been told to assume the customer is at fault? Despite being told up front that I did not change any settings or otherwise sabotage my access, and in fact I wondered if they had any issues that would affect me, the fellow asked me a series of questions that appeared designed to find out what stupid thing I had done.

After about half an hour, he had to “escalate” me to second-level tech support, who said there appeared to be a problem with the line and it would take them 24 hours to properly test it. Right after this statement, Tech 2 Person said “Have a nice day.” No apology, no promise to get things corrected quickly. I replied politely, “I doubt it given the circumstances, but thank you for the sentiment.”

For now, I’ve been able to receive a few e-mails using WiFi in the neighbourhood, but it’s next to impossible to send anything out, so I spent most of the morning trying to get a file to a client. With that accomplished, I hopped on the internet to see how many posts I’ve missed (13, in some cases) from the feeds I follow and post my own thoughts.

« Blogs and newsletters – separated at birth
Hint for useful manuals: cover the features »