Top 10 time: Bailout and other words of the year 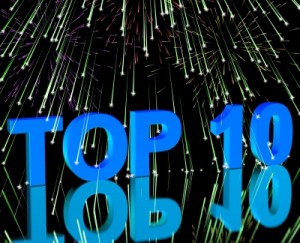 Word nerds enjoy this time of year, when various dictionaries and other authorities name top and top 10 words:

Merriam-Webster lists bailout as the word of the year for 2008 after it received the highest intensity of lookups on Merriam-Webster Online. Its Collegiate Dictionary, Eleventh Edition, defines it as “a rescue from financial distress.” In a similar reflection of the year, maverick made it on the list, defined as either “an unbranded range animal” or “an independent individual who does not go along with a group or party.”

Time also puts bailout on its list of Top 10 Buzzwords, at #2 after change. Others on the list that I enjoyed: staycation (vacation at home), topless meeting (where laptops and other mobile devices are banned) and rickrolled (after Rick Astley’s 1987 hit, “Never Gonna Give You Up”).

Global Language Monitor agrees with bailout as #2 and change as #1.  The Austin, Texas group also listed the most confusing yet frequently cited high tech buzzwords of 2008. These included cloud computing (distributing/accessing programs/services across the internet), green washing (repositioning your product so its shortfalls are now positioned as environmental benefits) and resonate (the ability to relate to a customer’s desires).

Dave Fleet‘s Top 10 most irritating phrases in PR includes some of my own pet peeves, such as moving forward; cutting-edge; leverage; utilize; and value-added (ugh to all of ’em!!). He references Oxford University’s top 10 irritating phrases, which include at the end of the day; fairly unique; and with all due respect.

These last two likewise make the list of the Daily Telegraph‘s top 10 annoying Britishisms, along with Know what I mean? and Take a pew. This is a companion piece to the Telegraph’s top 10 most annoying Americanisms, which puts Happy Holidays at number one. Others that I have to agree are annoying prevalent: do the math and not so much.

A site called Best Week Ever.TV lists top 10 words that only exist in gossip magazines, which includes one of my faves, canoodling (to snuggle affectionately).

Three words/phrases I seem to be running into frequently these days: resonate (see above); build capacity (apparently relating to developing technical skills or leadership abilities); and throwing someone under the bus (to distance yourself from another person).

« Ode to freelance joy
Back away from the Internet »