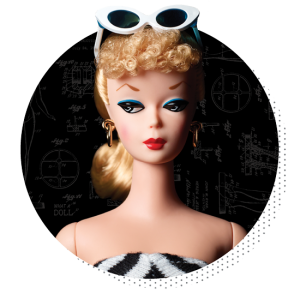 Talk about a toy with legs! Whether 50 is the new 40 or 50 is the new 30, she sure looks good. And she’s got all kinds of “dream” things — dream bedroom, dream dining room, dream kitchen, dream game room and more, much of it pink, like the dream bathtub (pink clawfoot tub with a pretend flat screen TV). You can see it all on the Mattel site, which at one point sported wallpaper in a violent pink with tiny paired images of her classic slip-on shoes.

Oh, Barbie. Yes, I had her, and a black case with tiny hangers holding her vast wardrobe of snug sheaths, pencil skirts and evening gowns, both store bought and lovingly sewn by my talented mother. I had little boxes holding multiple tiny accessories, like those iconic shoes.

I also had a cardboard Barbie Dream House, built by inserting tab A into slot B — my handyman father took on that chore, probably late one Christmas Eve. I briefly had a Barbie cake, made out of the stacked icing from four or five Oreos, until a visiting neighour kid ate it.

I also had Skipper, Barbie’s little sister. She had long blonde hair but few other features of her curvy sister; she had flat feet and a chest to match, so I totally identified with her. She also had sensible shoes and raincoats and shorts, and I don’t recall ever seeing a ballgown. I had a flashback moment visiting BarbieCollector.com when I spotted my “Dreamtime” set: dotted two-piece PJs with a lightweight fleece robe and slippers (all pink, of course) and a tiny blue felt stuffed cat.

Oh, you’re thinking this collection stuff is a girly thing. Nuh uh. My two sons had an enormous collection of Teenage Mutant Ninja Turtle gear that far surpassed my Barbie/Skipper collection. They had several different versions of the original four Turtles — Donatello, Leonardo, Raphael and Michaelangelo — plus assorted vehicles, a whack of bad guys to fight, and seemingly millions of tiny plastic weapons and accessories like pizza slices. The Turtles’ version of the Dream House was a sewer lair; we had that, too.

Some people scoff at toys like Barbie and the Turtles (hey, that would be a great band name, as humour columnist Dave Barry used to say). It’s true they seem to inspire an unfortunate need to collect, but a lot of imaginative play goes on amidst the piles of stuff. So keep on dreaming, Barbie!