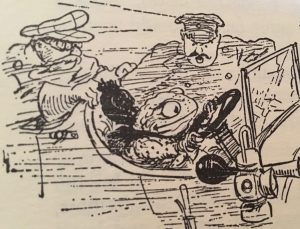 Mr. Toad, as drawn by Ernest H. Shepard in my vintage copy of The Wind in the Willows.

Don’t you love reading the expressive ways people find to make a point? Some of them make you laugh; some conjure up an appealing image or make an unusual connection. Here are a few of my latest finds, with the part I particularly liked in bold:

“If you have not seen The Social Network, put it on your list. It’s the Mr. Toad’s Wild Ride of movies, but it’s also an outstanding portrayal of the many forms obsession takes in the modern world.” – Colleen Wainwright‘s Communicatrix newsletter

“I wouldn’t patrol the newsroom looking for column ideas, they would simply arrive on my mental doorstep like cowpats.” – Heather Mallick writing in the Toronto Star about (then) Canadian Prime Minister Stephen Harper

“If your description of what you do — whether written or verbal — doesn’t feel painfully oversimplified (to you), it’s too complicated. I can’t even remember where I parked my car, do you think I’m going to remember your tagline when I leave tonight’s networking meeting?” – Michael Katz in his E-Newsletter on E-Newsletters

“‘If you have a quake of, let’s say, 6.2 or larger, every sand grain on the planet is moving to the music of that event,’ says Ross Stein of the US Geological Survey…” – Catherine Brahic in NewScientist on “The megaquake connection: Are huge earthquakes linked?”

“How on earth can [Mac Spotlight] be so good, you ask? Well, it’s hard to say. But some have speculated that it runs on only the purest tears collected from Apple’s most prized unicorns.” – J. Eddie Smith, IV

“I took on the responsibility of seeing to the welfare of something which didn’t ask to be small and helpless and can’t help having the personality of a ‘Jersey Shore’ cast member.” – Quinn Cummings on her nasty rabbit.

What gems have you seen? Please share in the comments.