So many ways to get words wrong 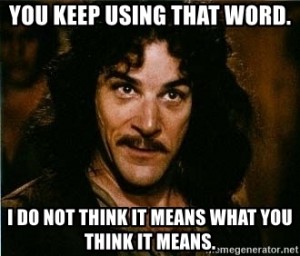 Stumbling over a few misused words recently brought to mind the 1987 movie, The Princess Bride.

Vezzini (Wallace Shawn), the “mastermind” hired to kidnap the princess, constantly describes unfolding events as “inconceivable.” Inigo Montoya (Mandy Patinkin) says, “You keep using that word. I do not think it means what you think it means.” *

I felt the same way when I ran across these examples:

“Jewelry should be expansive. Travel should not.”
I’m not sure what this ad for “amazing diamond rings, sparkling necklaces, exquisite earrings” was going for. Expansive means extensive or wide-ranging, which you’d think would be a good thing referring to both a range of jewelry and travel. And surely expensive would NOT be a good thing?

“Centreville has become a melancholy part of Toronto’s history.”
Melancholy is a feeling of pensive sadness, which doesn’t seem to apply to the children’s amusement park on Toronto Island. Was the writer trying for memorable, maybe? Merry? Much-loved? We’ll never know.

The illicit cannabis market “has mainly deferred to bright colours and poignant lettering in its marketing tactics.”
Poignant means deeply moving, touching, distressing or painfully sharp. Again, what did the writer mean? A photo showed wild, colourful lettering; possibly distressing to a graphic designer, I guess! What word do you suppose would fit?

Here are some other misspelled words recently seen in the wild, with the right word in brackets:

I’ve also run across examples that fit specific categories of misused words called eggcorns. This term is used for a word or phrase that sounds similar to the right word, and the result still (kind of) makes sense. The name was coined by linguists Mark Liberman and Geoffrey Pullum, after a woman who used eggcorn instead of acorn. Recently spotted:

Here are two other categories of “slips of the ear”:

Mondegreen:
A word or phrase that results from mishearing something said or sung. The name comes from a woman mishearing “laid him on the green” in a Scottish ballad as “Lady Mondegreen.”
Example: “’scuse me while I kiss this guy” instead of “kiss the sky” in Jimi Hendrix’s Purple Haze.

Malapropism:
The use of a word sounding somewhat like the one intended but comically wrong. The name comes from Mrs. Malaprop, a character in a 1775 play who was known for verbal blunders.
Example: “No one is the suppository of all wisdom,” instead of repository.

Fellow word nerds, have you found any misspelled or misunderstood words lately? Please share in the comments.

* Inconceivable = impossible to understand or believe.

« Wordnerdery: 9 ways to ace your endings
Why walk when you can fly? »