Before & after: Wordy article gets a rewrite 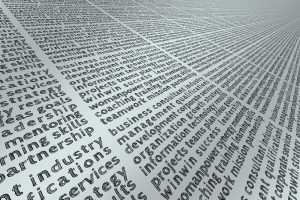 One way to help people understood something is get to the point. Don’t bury your information in too much detail, ramble, or hide the action with passive language.

While falling down the rabbit hole of internet links one day, I happened upon an article from 2015 that begged for help getting to the point. In the spirit of showing rather than just telling (and with apologies to the engineers), here’s my “before and after” treatment.

The original began with these three sentences, deemed “very hard to read” by the Hemingway app, as shown in red: 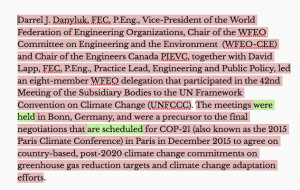 The first lengthy sentence stops readers in their tracks. It leads with so many titles and acronyms, it takes 44 words to get to one lonely verb, led. And can you tell what’s significant? Hard to say, but I’m guessing it’s the involvement of these engineers. My revision includes details about the other delegates from a later paragraph for better flow:

The next paragraph was short, and gave some detail about what the engineers were up to:

The paragraph may be short, but the sentences are not, Too many words are stuffed into two few sentences (hard to read, as the red indicates). The last sentence suggests the point of attending the convention may have been raising the profile of engineering. However, the passive construction (“The profile…and an understanding…were increased”) and mention of “the past eight years” confuse the issue.

The next few paragraphs gave more details, jumping back and forth between activities. 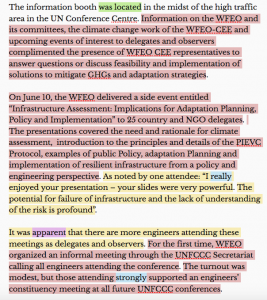 My rewrite combined these sections, shortened the sentences, created a list, and removed random capitalization (unfortunately, it still has all those acronyms):

WFEO-CEE’s activities at the Bonn meetings continued efforts to increase the profile of engineering and an understanding of its role within the UNFCCC. These included:
*  Operating a booth to provide information on the WFEO and its committees, the climate change work of the WFEO-CEE and upcoming events of interest; and discuss GHG strategies.
*  Delivering a presentation with the engineering perspective on the need for climate assessment, an introduction to the PIEVC Protocol, examples of public policy, adaptation planning and implementation of resilient infrastructure. One attendee commented,“Your slides were very powerful. The potential for failure of infrastructure and the lack of understanding of the risk is profound.”
*  Organizing the first informal meeting of engineers attending the negotiations as delegates and observers. WFEO organized this through the UNFCCC Secretariat, and feedback strongly supported a similar meeting at future UNFCCC conferences.
*  Engaging with Canadian government negotiators.
*  Contributing the engineering perspective at several policy and subject matter meetings.

The piece closes with a relatively short but hard-to-read paragraph:

Were these recommendations the point of the story? If so, I might lead with information from it. However, I’m guessing it’s something the delegation learned from the experience, in which case it can close the article. My rewrite shortens and puts the points into a list format:

Two key recommendations from the trip are:
1. Encourage Canadian universities to sponsor their engineering undergraduates and graduates to act as observers in future UNFCCC meetings;
2. Encourage Canadian engineers and engineering companies to offer their expertise to Canadian and foreign governments as the international agreements move into action over the next five years.

Well, it’s easy for me to be an armchair editor, and I’ve taken some liberties with the wording. Still, being mindful of getting to the point is a good approach to any piece of communication.

Before & after Plain language

« Wordnerdery: Part 2 of the inside view of employee comms
Dreaming up a new product? Think carefully about the name (ask Kim) »