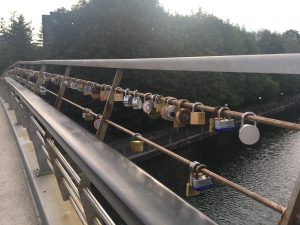 Love locks attached to a bridge in Ottawa, Ontario.

The idea of love locks is charming. They are small padlocks, often with names or initials etched into them, attached to a bridge, railing or fence as a symbol of love. Awww.

While they may lift lovers’ spirits, though, love locks can drag structures down. In 2015, custodians of the historic Pont des Arts bridge in Paris began removing the thousands of padlocks fastened each year ­– 7,500 kg of them – because they caused structural damage that led to one side of the fence falling off. Romantics keep trying, and this is an issue around the world.

Modern dictionaries reflect how we use words, so they’re always in a state of review and refresh. Love lock has gained enough traction that it’s one of the latest updates to The Oxford English Dictionary (“The definitive record of the English language”), and is among almost 1,000 fully revised entries and 800+ new entries and new uses of a word.

Here are some of the other entries that captured my attention, besides love lock.

You’ll be glad to know the pace of words related to COVID-19 has slowed. Still, there are a couple on this new list:

I was surprised these words are considered new:

These ones appealed to me or made me laugh:

Read OED’s look at many of the new words and uses in Whoop-de-do! It’s the OED September 2021 update.

Did any of them particularly appeal to you?

« ‘Spaghetti on a plate’ and more pandemic analogies (Wordnerdery)
Words, writing, life + more: Links to smart advice you might have missed »