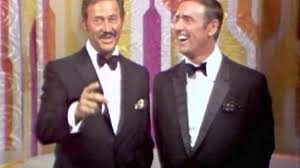 Reading a newsletter published by Communications Concepts, I noticed an item about new words being included in the Shorter Oxford English Dictionary. The writer included an example, biffy, adding, “People say, ‘You bet your biffy,’ but the word isn’t in the Merriam-Webster’s Collegiate Dictionary.”

The word is in the Oxford Canadian Dictionary, meaning outhouse. But what struck me about the comment was that the phrase should be, “You bet your bippy.” That’s what used to be tossed around on Rowan & Martin’s Laugh-In, a hugely popular comedy show that ran from 1968 to 1973.

Baby boomers will recall that the show had a whole repertoire of catchphrases like “You bet your bippy” that were often silly, vaguely suggestive or made no sense but were funny anyway. Relating to words, one of my favourites was, “Look that up in your Funk and Wagnalls.”

« Women ready for our close-up (advertisers, pay attention)
Do you Google yourself? You should »