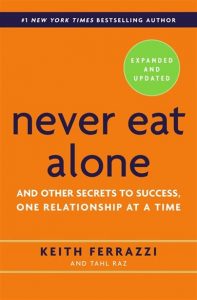 Networking gets a bad rap.

Really, if you go about it the right way, you don’t have to break into a cold sweat. Forget the (bad) advice to go in and give out as many business cards as possible and try to come away with work leads. Instead, look on each networking opportunity as a chance to make a connection with someone else.

Making those connections is one of the secrets to success promoted by Keith Ferrazzi in his book, Never Eat Alone And Other Secrets to Success, One Relationship at a Time.

Keith suggests going in with the idea of helping friends connect with other friends. The spirit of generosity recognizes that you may not get anything in return immediately, but you will build the relationships that encourage others to think warmly of you.

Among his other suggestions:

I agree with much of his advice, perhaps because I thrive on relationships myself. Sometimes, I’ve measured these in hugs, with one memorable day featuring three – two from friends/colleagues I had met through a networking group but hadn’t seen in several months, and one from an IABC member I had just met for coffee, after sharing ideas on her new freelance business. A couple of long-time clients regularly greet me with a hug, too.

How do you build relationships? How do you measure the strength of them?