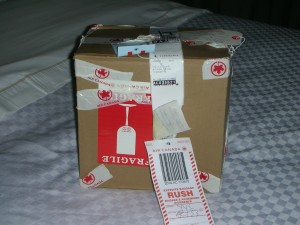 Can you explain to me what on earth I was thinking?

When I packed my bags for a visit to Calgary last week, I deliberately put a bottle of wine for my cousin in my carry-on bag, for safekeeping. That’s right. A container with more than 100 ml (3.4 oz) of liquid. That no airline will allow you to bring on board. In my carry-on.

As I was checking my other bag, the Air Canada person said I could check two bags. She was surprised, because the current rules are one checked bag, and a second will cost you $25. “I just have one,” I said.

It was only as I started to walk towards Security, and reached for the plastic bag holding a few assorted liquids and gels in containers 100 ml or less, that it struck me what was in my bag.

I have to give credit to Air Canada for helping me out. (Really!)

The fellow at the Oversize/Fragile Items Dropoff (who I thought might have packing material) sent me to another check-in person. Her system would only allow me one bag, so she grabbed a box that fit the bottle and came with me to Person #1, whose system still showed I was allowed two items. Person #2 taped up the box while #1 checked it and printed out the baggage ticket. Person #2 came with me back to the drop-off point and we handed it over.

In Calgary, my main suitcase arrived on the usual belt. No sign of the box, which I expected to be wine-stained and full of broken glass anyway. At the Baggage counter, the fellow entered the claim number and told me the box didn’t make it on the flight, but would be delivered to my hotel later that night or next day.

After checking into the hotel, I went out to dinner with a friend. By the time I returned, the box was waiting for me. You can see it looks slightly battered, but the bottle made it in one piece.

I know plenty of Canadians (including me) who have had bad experiences with Air Canada, so I’m happy to be able to share a story with a happy ending. So thanks Air Canada, and my apologies that in my flustered state I did not get anyone’s name.