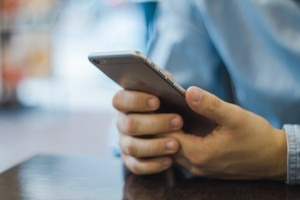 You claim you’re trying to quit. You sneak off to furtively indulge in just one more. You check your pockets often to make sure you have your secret vice with you.

In the old days (the Dark Ages, as my kids would say), you’d be a smoker. These days, you’ve got a smartphone.

That analogy has been out since an article in USA Today in 2006, and probably even earlier, but I just fell over it the other day. Writer Patricia Pearson (hey, she’s in Toronto!) says she will not meet friends in a restaurant or bar “unless they promise to switch off their cellphones and BlackBerrys.”

At the time, I didn’t have a smartphone, but my husband had a BlackBerry. He claimed to hate it, but he was often spotted at odd moments during an evening or weekend, BB in hand, scrolling through messages. (Never at the dinner table, though!) We had lunch with one of his clients once, who had one too. Twice during the lunch, the client took the BB out, looked, put it away; he was courteous enough to ask if we minded, and then explained he was expecting results from a son’s sporting event.

So put the devices away. Let them take a message. After all, you need to send a message yourself: You have a life, and sometimes it actually takes place offline.