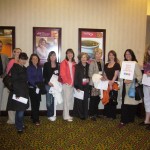 Back from the 2009 IABC conference in San Francisco (it’s a week ago already!) and I’ve finally found a few minutes to blog about it. (If you’re visiting from Les Potter’s blog, welcome! Be warned you’ve arrived at the PotterHorn mutual admiration society.)

I’ve blogged before about the value of attending IABC conferences, and I’ve been to many over the years. The professional development is great, the people are warm and welcoming, the social events are terrific (including the traditional hospitality of the Canadian party, sponsored for the second year in a row by CNW Group) and you can usually fit in some sightseeing in fun cities. Everyone has a large badge, so when you encounter in the halls and elevators, it’s your invitation to start a conversation. And that’s the thing with communicators; we barely need an invitation to get started talking.

That was definitely the case this year, but there was also something different happening: More than ever the conference built and cemented relationships that got their start online.

Say what you like about the time it takes to properly use Twitter, Facebook, blogging and other online adventures, it turns out the time can actually be well spent.

This is probably the first time I knew ahead of time that several people were attending, and made plans (that actually came through) to meet. The “warm” connections made by learning snippets of information on Facebook and Twitter and sharing comments on blogs and e-mails all led to a welcome feeling of familiarity with people I had only met online. So when we did meet in person, it was like meeting up with old friends. As Les described it, it was “a continuum of friendship not affected by time or space.”

So I had a delightful chat over coffee with Les. I got a warm hug from Linda Johannesson, with whom I’ve corresponded for years. I reconnected with a friend from Calgary I met at the dinearound in New York last year. I enjoyed getting to know fellow Toronto chapter members over dinner and on the walk from the opening reception to the Canada party. I briefly met some of the “rock stars” of communications, like Les, Steve Crescenzo, Shel Holtz and Lee Hopkins. I roomed with another rock star, podcasting queen Donna Papacosta (although we’ve known each other for at least 10 years).

Oh, and since I’ve been back, the people I met at this year’s dinearound (shown in the photo) have been in touch and we’re now connected on LinkedIn. Since the IABC conference is in Toronto next year, I’ve asked them to let me know if they’re going to attend and we’ll keep the connection going.

So the social piece of this year’s conference was a big highlight. More later on what I learned in the sessions.

« Seagulls, plankton and other great terms
Antiquing is a treasure hunt through time »