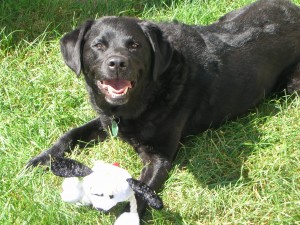 A dog-walking buddy (someone encountered while we were both walking our dogs) recently lost one of her dogs to cancer. Holly was just two, really still a puppy, so my friend thought there was lots of time for treatment. There wasn’t. Holly died within two weeks of the cancer diagnosis.

People — mostly those who don’t HAVE a dog — will say, oh, it’s just a dog. But it’s never ‘just a dog’ to someone who has been on the receiving end of the total adoration that is a dog’s bond with his or her human.

When my husband and I finally gave in to the pleading and agreed to get a dog, I seriously thought about how old our youngest son would be when the dog inevitably died, reassuring myself that he’d be old enough to handle it. There was no question that my own ability to handle it would be iffy, at best.

There was a wonderful piece in today’s Toronto Star on losing a dog that eloquently captures how I  know I will feel when Jake dies. Lauren Crothers writes:

“Grieving for a dog is an incredibly profound experience and no easier than the death of a human…While trawling the web for information on the process of euthanasia — so I would know how Murphy was going to die — I came across a comment left by someone along the lines of, ‘Who cares? It’s just a dog.’ It is for fear of this kind of reaction that many dog owners internalize their pain as they grieve. Just because it had four legs, chewed all the baseboards in the kitchen and perked up its ears at the sight of a bone doesn’t make the hurt any easier to bear.”

“Death is not easy to come to terms with. Losing a best friend is particularly difficult. It is never ‘just a dog.'”

I sent my friend a card to acknowledge her grief; it had a touching photo of an empty collar and leash on the front, which was enough to bring a lump to my own throat. Even though Jake, too, chewed all the baseboards in our kitchen, sheds so much that daily vacuuming is needed to keep the tumbleweeds of fur down, and has had me out walking in rain, snow and sub-zero weather, I know I’ll miss him when it’s his turn to go.

For now, thankfully, it’s just his turn to go for a walk.

« Write news releases without this lead
Changing the game? Speak up! »