Something urgent to discuss? Pick up the phone! 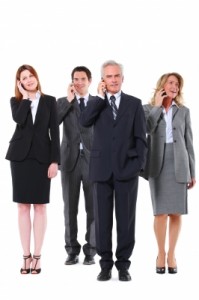 When was the last time you actually called someone rather than send an email or a text message?

I was out with a friend recently and we got to talking about how people seldom pick up the phone and call each other any more.

Even when it would be easier and faster to actually talk about an issue, we get caught in back-and-forth email messages. Or worse, we’re one of many people “cc’d” on an endless round of email back-and-forthing. So an answer or decision that could be hammered out in a couple of minutes by telephone ends up adding to everyone’s overflowing in-box. (Typically those messages also contain every previous note, plus they change directions a few times and end up discussing something that isn’t reflected in the subject line, too, but that’s a rant for another day!)

The noise of other messages fills your cellphone as well as your in-box. The Pew Internet & American Life Project research from September 2011 showed that one-third of text message users prefer them to voice calls, and cellphone users between the ages of 18 and 24 exchange an average of 109.5 messages on a normal day! Good luck getting attention that way, except perhaps for your teenaged kids.

Then there are the scams based on a “friend” emailing or messaging through Facebook, claiming to have been mugged and needing cash. Really, if you seriously needed money from a friend, wouldn’t you call your best friend or your parents to ask, rather than relying on email? But people have fallen for these scams because we’re so used to email and texting.

So here’s a thought. Next time you have something complicated or important to discuss, pick up the phone first. True, you might get voice mail, but it’s worth a try!

What about you? Do you prefer to use email and texting no matter what, or are you more likely to call?

« Social media can be magic
#NoMoreBullies »