Let’s be discreet about using discrete 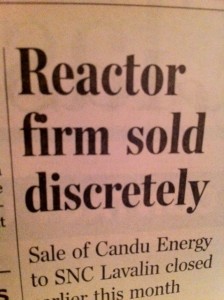 Don’t you find that it’s rare to see the word “discrete” used correctly? For some reason, that’s one of the most frequent homonyms (also called homophones) I keep running into lately —  referring to one word mistaken for another that sounds the same.

When I first saw the newspaper heading shown here, I thought the firm was being sold in separate units or parts, in which case “discretely” is correct. As I read the article, it became apparent that the writer actually meant “discreetly;” efforts to sell the firm were happening under the radar.

Here are a few other common homonyms I keep seeing:

Reins/reigns:
Reins are something used to control a horse or otherwise curb or halt something: “He wasn’t willing to give up the reins to a junior officer” or “You’ll have to rein in your spending.”
Reigns (or more likely, the singular reign) refer to the length of time someone held power or something stayed in fashion: “The king enjoyed a long reign.”

Throes/throws:
To be “in the throes” of something means struggling with something painful or emotional, as in death throes.
Throws are light shawls, so you could be in one, but chances are you wouldn’t be in many at a time.

If any of these are words you occasionally use, check them carefully, and if they trip you up, pick a different word that won’t get you into trouble. It can also help to set aside your work and re-read it before publication.