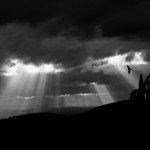 It was a dark and stormy night…

So begins Edward Bulwer-Lytton‘s novel Paul Clifford, the inspiration for the Bulwer-Lytton Fiction Contest. In tribute, the contest gives awards for the “opening sentence to the worst of all possible novels,” or what the founders call “truly awful writing.” And at last, the 2012 winners are enjoying their fame.

The overall winner is Cathy Bryant of Manchester, England, for this gem:

“As he told her that he loved her she gazed into his eyes, wondering, as she noted the infestation of eyelash mites, the tiny deodicids burrowing into his follicles to eat the greasy sebum therein, each female laying up to 25 eggs in a single follicle, causing inflammation, whether the eyes are truly the windows of the soul; and, if so, his soul needed regrouting.”

When I wrote about this contest in 2010 and in 2009, I laughed out loud at many of the entries. This year, there were few that sparked that same degree of amusement, although I quite like the Crime category winner, by Sue Fondrie of Appleton, WI:

“She slinked through my door wearing a dress that looked like it had been painted on … not with good paint, like Behr or Sherwin-Williams, but with that watered-down stuff that bubbles up right away if you don’t prime the surface before you slap it on, and – just like that cheap paint – the dress needed two more coats to cover her.”

The contest is the brainchild (or Rosemary’s Baby, as he calls it) of the amusing Professor Scott Rice at San Jose State University. For a laugh, be sure to read the history of the contest. And if you have a truly awful submission, send it any time to him at srice AT pacbell.net.

Presumably, the contest entrants look on this as a bit of creative fun and don’t normally write this way!