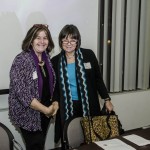 Members and guests of IABC/Toronto’s Professional Independent Communicators (PIC) saw first-hand why Donna is known as the Queen of Networking.

If any of us expected a traditional PowerPoint presentation, we quickly found out that Donna doesn’t work that way.

Networking, Donna told us, is “a systematic process that gets measurable results. If you aren’t getting results, you aren’t networking.”

Making her way from person to person, Donna demonstrated that networking is really “business matchmaking.” Take what you learn about a new contact and find a match in your network. A healthcare writer, for instance, might like to be introduced to someone you know who leads communications in a hospital.

Use the 3 Ws: Who are you? What do you need? What are you willing to share?

Donna explained the “3 Cs of networking” as collaboration, communication and commitment, found in these four steps:

Donna mentioned that the PIC group was her third event of the day, but her energy and enthusiasm certainly gave no hint.

“Networking is the single most important thing you can do to get a job, keep a job, find a man, whatever!” she said. “It’s magic.”

Update: Sadly, Donna died on April 3, 2015. She had been diagnosed with cancer just weeks earlier.

« A newsletter for the ‘shoemaker’s’ daughter
Show your personality! Ask Google; people love it »