Why there’s a Coming Out Day (and why it matters) 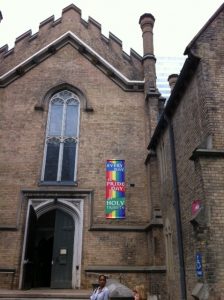 October 11 is National Coming Out Day — meant to be a reminder of the power of coming out as gay or lesbian.* The day marks the anniversary of the National March on Washington for Lesbian and Gay Rights in 1988.

But chances are, you actually DO know someone who is gay. You just may not know it. And as an acquaintance said after reading my son’s powerful post about growing up a gay sports fan (which makes me cry every time I read it):

“When it involves someone you know and like, it causes you to be a lot more open-minded and accepting to things that are normally foreign.”

Yes, it’s foreign to some, but it’s not a lifestyle choice, as some people call it. Do you think anyone would choose to be discriminated against, to risk being beaten up or even killed, depending on where you live and what the local laws are? No, as Lady Gaga sings, we’re all “born this way,” whether “this way” is gay or straight, male or female, has white or black or any other shade of skin.

That’s why coming out is so important. As more people come out, others start to realize they actually DO know someone who is gay; and oh my gosh, it’s not the end of the world! Sometimes, they change their minds, or at least become slightly more tolerant.

Changing minds one at a time is a slow process, but it’s having an effect. In March 2013, the Pew Research Center for the People and Press reported that:

“[T]he rise in support for marriage equality over the past 10 years was among the largest changes in opinion on any policy issue over this time period.”

As the Human Rights Campaign says, “Every person who speaks up changes more hearts and minds, and creates new advocates for equality.”

That’s why coming out is important. That’s why there is a Coming Out Day.

Getting off my soapbox now. 🙂

*Gay and lesbian has expanded to LGBTQ2: lesbian, gay, bisexual, transgender, queer (or questioning) and two-spirit.