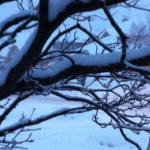 Snow is again falling, the story of the winter of 2013-2014 for much of the eastern United States and Canada. It’s barely February, so there is much winter to come. Even skiers can’t be happy about this, when blowing snow creates whiteout conditions for the drive to the ski hills.

The wintry conditions are giving new life to old winter words, and prompting new ones. These seem to be gaining traction (will one be next year’s Word of the Year?):

Blizzaster: The latest portmanteau (blizzard + disaster) trying to turn a snowfall into something bigger. Wordspy.com explains.

Frost quakes: This is the explosive sound made when rain seeps into the ground, freezes as temperatures plummet, and then expands. The official name is cryoseisms, but who else but a scientist uses that? Here’s an explanation of frost quakes by CityNews meteorologist Natasha Ramsahai.

Ice missiles: Chunks of snow or ice that come flying off another vehicle, because the driver did not bother to clean off the car before getting on the road. Wordspy.com says it was first used in 1994.

Polar vortex: This band of cold air moves out of the Arctic southward. In late 2013 and early 2014, it covered much of the eastern U.S. and Canada, bringing frigid air to places that normally don’t see extreme cold. NASA explains.

Snowmaggedon and snowpocalypse. More word sandwiches to convey the the vast scale of an incoming storm system. Often used as ridicule when the storm proves weaker than expected.

What other winter weather words have you heard?

« Guest bloggers allowed, but you’d better be genuine
Give and get the lowdown on shopping in Toronto »