In which Sue survives a perilous climb 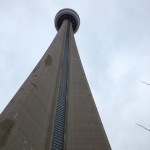 What I was thinking?

Months ago, I agreed to do a fundraising event, the 24th annual Canada Life CN Tower Climb. That’s 1,776 steps, from the bottom of that tower on the left, allllll the way to the observation deck. I would be part of the Advantis Communications team, raising money for WWF Canada “to protect the world’s biodiversity, conserve critical habitats and address global threats like climate change.”

I am not a runner, but surely 13 years of walking the dog three times a day would mean my legs were strong, right? Of course, these days, said dog is old and has slowed to a crawl. No heart rates are raised on daily walks with him. So perhaps cardio might be a problem.

The staircase to the basement in my house became my cardio training ground. But however many times I did those 10 steps, it was nowhere near what the Climb would require. Plus, I was derailed several times by life, including being sick for two weeks as Climb day, May 1, approached.

I was a little nervous. 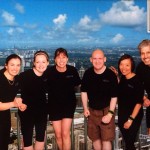 On the big day, our CommsCrusaders team (shown at right) was among nearly 4,000 climbers in the team event. Once past all the security checks and on the stairs, there was no going back. Although I had researched training tips, I hadn’t checked what a fast or slow or typical time was. I really didn’t know what to expect, except that there would be paramedics stationed along the way in case of emergency.

As with much in life, reality turned out to be less difficult than I had feared.

I just put one foot in front of the other and aimed for slow and steady, with an occasional pause to catch my breath (thank you, Ernesta, for being my ‘pacecar’!). I am not ashamed to say I used the railings. With no idea how the numbers posted on each landing corresponded to the 1,776 steps, I never knew where I was. (Halfway up? One-quarter of the way?) I just kept going.

My time was 28:40, which I later found out was slightly better than the average 30 minutes. The record apparently goes back to 1989, when an overachiever named Brendan Keenoy completed the climb in just under eight minutes. The CommsCrusaders also raised $2,255, which was more than the minimum required. Thank you to all our supporters!

Is there a lesson to learn from this experience? Perhaps this: We are all capable of much more than we think.

What’s holding you back from doing something that scares you?

Related post:
Some of the other scary things I have done, and tips for staring down fears

« How often should you publish your newsletter?
Do’s and don’ts for writing effective captions »