Reports of print’s death are exaggerated 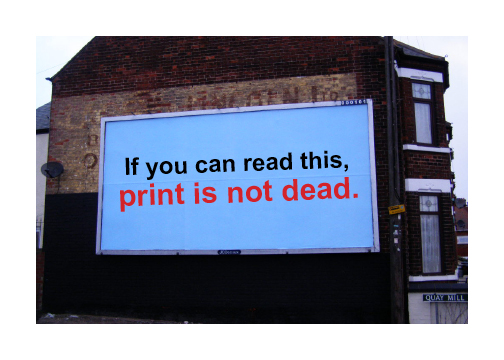 Author Harper Lee’s recently discovered book, Go Set a Watchman, will launch with an e-book and audio book – and two million print copies. Her original 1960 book, To Kill a Mockingbird, still sells more than a million hard copies a year.

Clearly, print is not dead. Here are some of the reasons why:

Read the February issue of Wordnerdery for more on why experts say print isn’t dead.

Wordnerdery is a quick read about words, effective/expressive writing, newsletters and more. Are you a subscriber yet? If so, thanks for reading! If not, you can sign up right now. In keeping with Canada’s anti-spam laws, you can easily unsubscribe anytime.

Image: ‘Print is not dead’ billboard by Colormetrix.

« LinkedIn turns up the noise
Runs with undies »