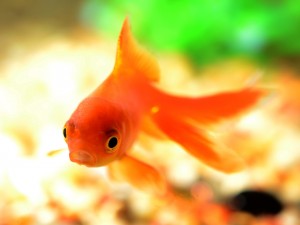 Never mind the famous thought that people have a shorter attention span than that of a goldfish. (Who measured the goldfish anyway, and how?)

People pay attention when they are interested, or when it’s in their best interest. So if you’re producing articles, web copy, blog posts, marketing material and other writing, you need to capture the reader’s interest.

Do so by borrowing a technique used by novelists and feature writers: what I call expressive writing, also known as figurative writing. As Don Ranly, professor emeritus of the Missouri School of Journalism, says, “Appeal to the senses. Be specific and concrete rather than general. Don’t tell me – show me.”

Here are three ways to use expressive writing:

1. Use analogies (similes or metaphors)
Similes compare two things, using “like” or “as”:

Metaphors compare the unfamiliar to the familiar without using “like” or “as”:

2. Use colourful, specific language
See how specific details make the writing sharp in the following examples:

3. Make numbers meaningful
Numbers large and small are often meaningless without context. Help readers out by translating the unknown or comparing it to the known. For example:

Find inspiration by looking for examples of expressive writing in books, magazines, news reports and music. Pay attention when someone is explaining or describing something. And enlist your friends in spotting examples. My thanks to my friend Jeanette King, who sent me this gem:

“Inside a pocket of his coat there was the flinch of his phone as it gathered a text, the small noise that warned him of incoming communications.” – A.L. Kennedy in The New York Times

What other examples of expressive writing have you seen? Please share in the comments. I’m always looking for great examples!

This post first appeared in my monthly newsletter. Wordnerdery is a quick read about words, effective/expressive writing, newsletters and more. Are you a subscriber yet? If yes, thanks for reading! If not, you can sign up right now. In keeping with Canada’s anti-spam laws, you can easily unsubscribe any time.