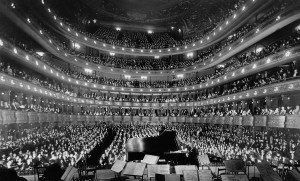 You can’t always (ever?) be wildly creative in corporate writing. But you can choose words and phrases that are interesting and colourful to help your readers “see” what you mean.

If you want to explain something, make a point or reflect or spark emotion, reach for expressive language that shows rather than tells. Here are three ways:

“On tiny Paulet Island, thousands of penguins were perched in rows up a rocky slope, evenly spaced, like an audience at an opera house.” – Craig Welch in National Geographic

“End Pain Forever: How a Single Gene Could Become a Volume Knob for Pain.”  – Eerika Hayasaki in Wired Magazine

“Snow shattered and spilled down the slope. Within seconds, the avalanche was the size of more than a thousand cars barreling down the mountain and weighed millions of pounds. Moving about 70 miles per hour, it crashed through the sturdy old-growth trees, snapping their limbs and shredding bark from their trunks.” – John Branch in The New York Times

“We were driving east, through a land dressed for autumn…We rattled higher through dark spruce and lodgepole. Mist snagged on the peaks.” – Christopher Solomon, as told to Nieman Storyboard

“One data expert discovered that his Google account contained the equivalent of three million Word documents. If he were to print those off, the resulting stack would be taller than the Empire State Building. For comparison, Shakespeare’s entire stack, including his works, is not quite as high as a can of soda.” – Scott Gilmore in Macleans Magazine

“The last presidential election turned on fewer than 100,000 votes in three states. More people go to Coachella.” – Barack Obama in 7 excuses not to vote

Need some inspiration? Look for expressive writing in books, magazines, news reports and music. Pay particular attention when someone is explaining or describing something.

What expressive writing have you seen? Please share in the comments. I’m always looking for examples!

« For readability, choose words that communicate
Wordnerdery: 8 reasons to keep e-newsletters in your comms toolbox »