2 metres? 6 feet? How to make those numbers make sense (Wordnerdery) 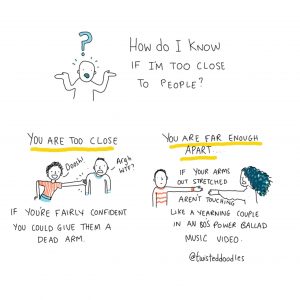 We’re still seeing one particular number everywhere these days – two metres (six feet). That’s how far we have to stay away from others to slow down the spread of COVID-19.

But how far is that, really? Everyone citing this number quickly realized people need a better feel for what that distance means to be able to stick to it.

Here are some of the ways I’ve seen it explained: 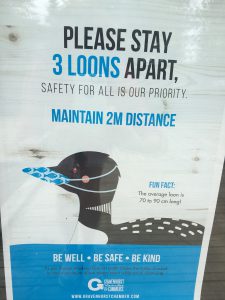 The range of comparisons is a reminder that you “help your audience visualize and comprehend data by comparing them to familiar things,” says Nancy Duarte, who promotes using stories in business communication. As an example, she says, “if sales of your product dropped by a million units, convert that very large and hard-to-fathom number into something that is relatable. Perhaps that much product could fill the Empire State Building or half of Wrigley Field.”

Here are some other examples of putting numbers into context that I’ve collected:

“Four hundred seventy million years is a span pretty well beyond grasping, but if you can imagine flying backwards through time at the rate of one year per second, it would take you about sixteen years to cover such a period. It’s a long time.” – Bill Bryson, A Walk in the Woods

“Remember, in the social stream, [your LinkedIn profile pic] may be as small as 50 x 50 pixels. That’s the size of your fingertip.” – Andy Crestodina

“US dairy producers now have a whopping 1.39 billion-pound surplus of cheese…There’s enough excess cheese to arm each American citizen with a hefty 4.6 pounds of the crumbly, melty, salty good stuff…. What does more than a billion pounds of cheese even look like? …[it] would roughly take up 900,303 cubic yards. That’s a mountain of cheese, comparable to the size of the US Capitol Building.” – Brian Resnick and Javier Zarracina in Vox

“The shopping department at Central moves 32,000 books – the equivalent of an entire branch library – around the city of Los Angeles five days a week.”  – Susan Orlean, The Library Book

What clear or creative explanations have you seen, recently or in the pre-pandemic world we all dimly remember? Please share in the comments.

Cartoon used with the permission of Dublin illustrator “Twisted Doodles.” This post first appeared in my newsletter. Wordnerdery is a quick read about words, effective/expressive writing, newsletters and more. Are you a subscriber yet? If yes, thanks for reading! If not, you can sign up right now. In keeping with Canada’s anti-spam laws and just plain good manners, you can easily unsubscribe any time.

« Play ‘lockdown bingo’ with corporate clichés
Side effect of the pandemic: Trademark erosion »