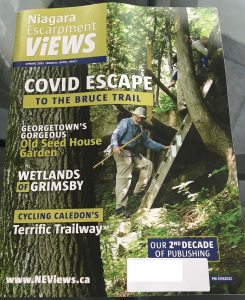 Who sets out to hike 900 km of physically demanding and sometimes treacherous terrain, with the risk of encountering unexpected storms, poison ivy, rattlesnakes, bugs, maybe even bears? The answer: Hikers who do the Bruce Trail “end-to-end,” and there are more than 4,000 of them. My article for Niagara Escarpment Views Magazine takes a look.

For Robyn Phillips, golf was a lifeline during the pandemic restrictions of 2020. As she finished a round in September with the regular partners in her bubble, Diane Ruygrok and Jen Van Tiggelen, they looked to the looming winter with dismay. What would they do without golf, travel and dinners out?

Robyn had always loved hiking, and when she heard about someone who had walked the entire Bruce Trail, the idea struck a chord. The Bruce Trail is Canada’s oldest and longest marked footpath, stretching 900 km along the Niagara Escarpment, from Queenston Heights to Tobermory. Since its creation, the idea of hiking its entire length – known as an “end-to-end” – has caught the imagination of hikers.

None of the three had done extensive hiking, but all were active, fit and adventurous. Tackling the trail section by section seemed doable spread over two years.

When golf season ended, the three invested in good hiking boots and headed for the Southern Terminus at Queenston Heights. Between November 3 and December 3, 2020, they logged 83 km over weekly hikes to complete the Niagara section. Their end-to-end was underway. 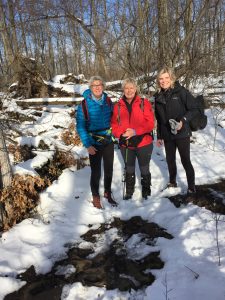 Robyn and her friends [shown here] are among many who flocked to the Bruce Trail in 2020. “More than ever, people have been seeking a connection to the natural world, to find solace and rejuvenation,” said Bruce Trail Conservancy (BTC) CEO Michael McDonald in Bruce Trail Magazine.

Finding solace in nature is one thing. But the trail is often physically demanding and weather can make it treacherous. You might encounter bugs, poison ivy, rattlesnakes and other hazards. And who starts a journey that takes several weeks to several years?

Walter Soroka was the first, and he didn’t waste any time; he set off right after the ribbon-cutting ceremony that officially opened the trail on June 10, 1967.  At the time, the trail covered 643 km, and the journey took him 14 days. When he finished, his comment says much about the experience: “I would like to make a public apology to my wife, Laurie, for charging off on a hare-brained scheme in the first place,” he told Bruce Trail Magazine.

Hare-brained or not, many have followed Walter’s footsteps.

In 2019, BTC gave a record 218 official numbers to members who completed an end-to-end, more than in any of previous 10 years. In total, BTC has recognized 4,000 end-to-ends over its 51 years of operation. No doubt, many more people have completed the trail without fanfare. Note that BTC did not issue any numbers in 2020 for those who began during the lockdown, since the trail was closed for part of the year, and now encourages people to put their end-to-ends on hold.

BTC doesn’t track speed for safety reasons, and “Completing the entire 900-km Bruce Trail in a single trip is a major endeavour requiring significant physical, mental and logistic preparation,” warns the BTC website. Still, there’s always someone who is all about speed.

Self-described “veteran endurance athlete” John Harrison Pockler had no races in 2020 due to COVID-19 and was looking for a challenge and a way to keep training. John broke the record for the fastest end-to-end, finishing his in September 2020 in nine days, 17 hours, two minutes and 25 seconds. The venture involved two and half months of planning, a base crew of six support people, and an RV. 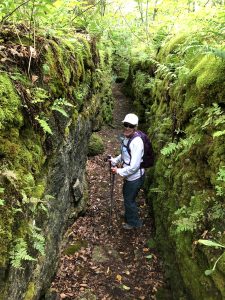 More typically, hikers will take about two years. That’s the plan for runner Cin Johnston (shown here), whose first end-to-end is part of her bucket list.

Once Cin retired in 2017, she decided to hike the entire trail, 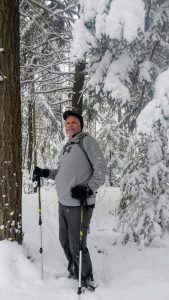 sparked by taking part in a 30K “Survival Run” through parts of the Iroquoia section. She and her husband had become good friends with Calvin Snow [at right] and his wife through a running club in Milton. Cal, too, had recently retired and wanted another adventure.

With both spouses still working, he and Cin joined forces that fall and started in Niagara. After a delay due to knee surgery, Cal still has the Bruce Peninsula to cover. The plan is to finish in 2021, with their spouses joining in for the final leg.

Once is (apparently) not enough

As for the most end-to-ends, the record is 50 times, set by Doug Sloan [shown on the magazine cover above], a lifetime member since about 1995. He started hiking seriously in 1990 and was smitten, completing his first end-to-end three years later at age 52.

“Hiking has a quality akin to meditation, among other things,” Doug explains. “You can devote one part of your mind to the actual hiking whilst pondering the great and small questions of life. Or have lively conversations. It’s also a great community of hikers.”

Over the years, he’s mixed up how he tackled the challenge, doing the trail in 12 Saturday hikes in 2004 and a “double-double,” or four end-to-ends, in 2005. That meant hiking out and back to his car every day to finish two end-to-ends in 31 days. At the end of this first double, he took eight days off and did it again, this time in 29 days.

Doug finished his 50th end-to-end on July 18, 2015, which he figures brings his total to the equivalent of walking around the world. He’s still doing regular 16- to 28-km hikes, although stopped doing official end-to-ends. “Had to give all those friends of mine trying to catch up something to shoot for, you know!”

As for Robyn Phillips and her friends, their eyes are firmly set on one end-to-end.

To make it official: 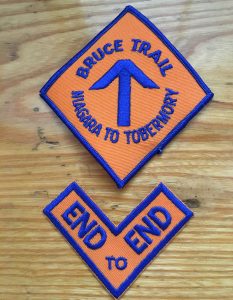