So what if you dangle your modifier? (Wordnerdery) 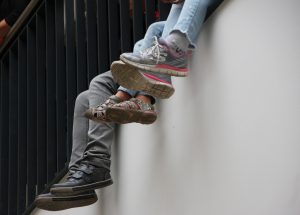 Does it matter if you dangle your modifier?

Many would say it doesn’t matter; it happens all the time. I’ve done it. You’ve probably done it.

Still, be aware that some people will notice your dangling modifier and have a laugh at your expense. That’s because the dangling modifier often makes for an unintentionally amusing sentence. Here’s a perfect example, shared on Twitter by writing instructor and plain language fan Leslie O’Flahavan:

“At 170 years old, you will relax creekside listening to its meditative trickle and watch happily grazing cows.” 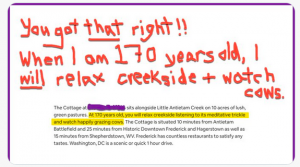 In this case, “At 170 years old” is the dangling modifier. It’s meant to modify – that is, describe, clarify or give more details about – a cottage mentioned in the previous sentence. It doesn’t. It’s left dangling because it doesn’t properly connect to the right word. Instead, it follows the typical construction of English sentences, in which the person or thing referenced (“At 170 years old”) is revealed in the main clause that immediately follows (“you”).

The March issue of my newsletter, Wordnerdery, looks at dangling modifiers and how to fix them. Some examples include a family built in the middle ages, a house as nature lover, reporting that’s five feet tall and more.

Does it matter? Well, it’s not the worst crime against good writing, but it’s good to have it on your radar.

Wordnerdery is a quick read about words, effective/expressive writing, newsletters and more. Are you a subscriber yet? If yes, thanks for reading! If not, you can sign up right now. In keeping with Canada’s anti-spam laws and just plain good manners, you can easily unsubscribe any time.