Before & after: Be clear if you want public comment (Wordnerdery) 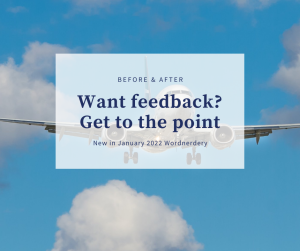 At 100+ decibels, the sound of a large jet nearing a runway’s end is as noisy as being in the front row of a rock concert. (Remember those?)

While the pandemic slashed the number of planes landing at and taking off from Toronto’s Pearson International Airport, business is picking up. And that means noise is coming back as a big issue for communities under the flight paths.

That’s a concern for the Greater Toronto Airports Authority, which runs Pearson, and NAV CANADA, which governs air navigation like flight arrival procedures. To their credit, they’ve been monitoring noise and sharing what they’re doing with the community. Are they being clear, though?

A piece on the NAV Canada website about an upcoming “Public Consultation” – with no mention of where or when until the end – called out for a “Before & After” treatment. I ran the page through the Hemingway app to get a fast impression of how easy it is to read. The result? It’s not. It’s written at a post-graduate level, easily readable by only about 4.5% of readers. 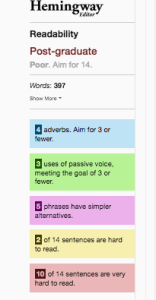 My January newsletter, Wordnerdery, takes a closer look at the opening 36-word (!) sentence. I also show how getting to the point, reorganizing and rewriting the piece makes it more likely to be read and more easily understood.

You could argue that people annoyed about airplane noise will comment anyway, but no sense making it harder for them to do it.

Wordnerdery is a quick read about words, effective/expressive writing, newsletters and more. Are you a subscriber yet? If yes, thanks for reading! If not, you can sign up right now. In keeping with Canada’s anti-spam laws and just plain good manners, you can easily unsubscribe any time.

Before & after Plain language Readability

« Cheers to 31 years in business ’Getting it Write’
My yearly question answered, and why blogging isn’t dead »