A whale of a tale in told in numbers 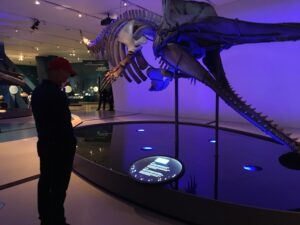 Part of the joy of running your own business is playing hooky on a random weekday. So it was that my husband and I spent a recent day enjoying a visit to Toronto’s Royal Ontario Museum (ROM) followed by a Toronto Blue Jays baseball game.

For the second time, the ROM had a special exhibit devoted to whales, the largest and one of the most endangered species of marine mammals. I visited a similar exhibit at the ROM in 2017, and was particularly taken with how well the ROM gave a sense of the size of these enormous creatures. For instance:

The sperm whale skeleton in the exhibit (seen above) is 13 metres long, about as much as 7 average humans lying head to toe.

The blue whale skeleton stretches 25 metres long, as much as two school buses. Alive, Blue would have weighed over 90 tonnes, or nearly 200,000 pounds, as much as 1,600 average humans. 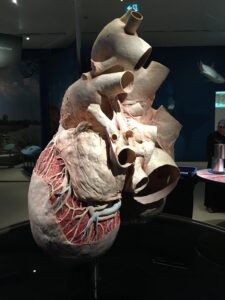 The largest heart in the world, shown here, belongs to the blue whale. It’s 1.5 metres tall and over a metre wide, almost as big as a small car. The biggest vein, the posterior vena cava, is 40 centimetres wide – large enough for a human baby to crawl through.

That big heart pumps so much blood through its massive body that it only beats ten times a minute. Each time it does, it pushes a bathtub’s worth of blood to the whale’s body.

Over 15% of whale species are endangered and some are on the brink of extinction. The ROM puts the alarming decrease in whale population into perspective:

The loss of nine blue whales in 2014 represents about 3% of the Northwest Atlantic’s blue whale population. Think that isn’t much? 3% of Canada’s population = Everyone in Saskatchewan.

Forty North Atlantic right whales have died since 2017, or about 10% of the entire species. Doesn’t seem like much? 10% of the world’s population = Everyone in North and South America.

The two main threats to whales are entanglement in fishing gear and accidental vessel strikes – not necessarily something regular people can affect. But whales are also increasingly harmed by ingesting plastics, and that’s something we can all work on: reduce the use of plastics, don’t litter, participate in beach cleanups and act responsibly around marine animals.

If you’re local to an area where whales are found and you see one stranded, injured or otherwise in trouble, contact a local support group. In the Maritime provinces, call the Marine Animal Response Society at 1-866-567-6277. And if you’re visiting such an area and want to go whale watching, make sure the operator maintains a safe distance and is careful not to disturb the animals.

Related reading
Read more about Out of the Depths: The Blue Whale Story
An issue of my newsletter shows how the ROM and others take the dull out of digits