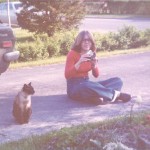 Easter was early that year; March 26. I was awake but still in bed when the doorbell rang.

It must have been something like 7 a.m., so my parents and I knew something was wrong; we arrived at the door at the same time, throwing on robes. There was a police officer standing there, cap in hand. My big sister, just 24 years old, had been killed in a fire.

Grief affects people in ways you cannot imagine until you experience it. I found it wiped out entire tracks of memory, like a defective tape or a DVD that hits a scratch and repeats a scene or suddenly skips to the next.

By chance this week a library hold came through: Joan Didion‘s The Year of Magical Thinking, in which she recounts the sudden death of husband John Gregory Dunne and the year that followed. (A good book, by the way.) She says:

“Grief turns out to be a place none of us know until we reach it…In the version of grief we imagine, the model will be ‘healing.’ …We imagine that the moment to most severely test us will be the funeral, after which this hypothetical healing will take place…We anticipate needing to steel ourselves for the moment: will I be able to greet people, will I be able to leave the scene, will I be able even to get dressed that day?

We have no way of knowing that this will not be the issue…Nor can we know ahead of the fact (and here lies the heart of the difference between grief as we imagine it and grief as it is) the unending absence that follows, the void, the very opposite of meaning, the relentless succession of moments during which we will confront the experience of meaninglessness itself.”

Joan was blonde, blue-eyed, attractive, lively, fun. She had lots of friends and always had boyfriends. We shared a room until she went to university. She became a dietitian and had her own apartment, and we had been talking about me moving in with her. I am both sad and kind of mad that I didn’t get the chance, that she did not have the joy of walking down the aisle with the man of her dreams, did not get to be part of my wedding, did not get to be a doting aunt to my two boys or have children of her own.

There are a lot of people in my life right now who don’t know about Joan. I can talk about her with others who knew her, but I’ve been unable to introduce the idea of having and then not having a sister without choking up. Yes, even after so many years.

Now that you know, feel free to mention her, or to give me a hug.  And if you have a sister, be sure to give her a hug too.