Smile! Don’t let your passport photo get you down 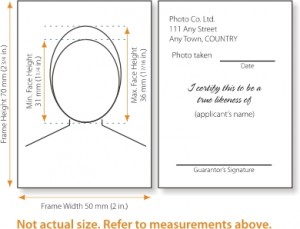 There are few things more intimidating in the photo world than a passport picture.

Maybe it’s because you know it’s going to stick with you for at least five years, maybe 10. You know the “neutral” expression you’re supposed to have will actually end up making you look grim and ill. In fact, you’ll look like the terrorist everyone fears. And isn’t that just perfect, when everyone at the airport is already so touchy?

The last time I had to renew my passport, this perspective made me laugh. The essay (no longer available) was Called Has Anybody Seen My Lost Looks? from Jenny Allen in More Magazine:

“The last time they took your two-by-two inch photo, back in the day, you were OK-looking, even in that ghoulish post office fluorescence. You didn’t think you looked OK at the time, but it turns out you were incorrect. You should have appreciated the medium-attractive looks you had…You could have taken pleasure in them! You could have used them to get people to sleep with you and buy you things!…Particularly in light of recent events. Recent events being that your looks seem to have gone away.”

The hilarious Colleen Wainwright aka Communicatrix also blogged about the endless preparation leading up to getting a passport photo taken, in the hopes of looking OK:

“I’d think about getting my passport photo taken, the first step in crossing ‘Renew (expired) passport’ off my list, and then I’d think, ‘Well, I’ll just wait until…’ Until my hair was freshly colored. Until my hair was having a good day. Until I’d figured out an outfit, and bought some makeup, and had had enough sleep. Until, that is, monkeys flew out of my ass. In formation. Typing Shakespeare.”

You may be wondering what communications has to do with passport photos, and yes, there is a link. I think we see ourselves based in part on the feedback we get. When we don’t get much in the way of positive feedback, we might think it’s because there is nothing good to say. More likely, it’s because others just aren’t thinking about your looks, Or maybe they think you don’t need it.

For example, when I was on vacation recently, I met a strong, vibrant 60-something woman who really was beautiful, though perhaps not in the tiny, airbrushed model sense. She was absolutely floored when I told her so.

In the case of your corporate job, others expect you to do good work and you do. Most times, they don’t think about complimenting or praising you for it. That may be part of the reason employee surveys often show that management (sorry, “leadership” is the current buzzword) is doing a less-than-stellar job of reward and recognition.

So here’s an idea. Let’s all try to compliment people a little more. Express appreciation for work done well, even if you expect it, the person has never done anything BUT good work or it’s part of the job. Recognize when someone has gone out of their way for you.

And if all else fails, take heart that you really don’t look much like your passport photo, especially when you smile. So smile!