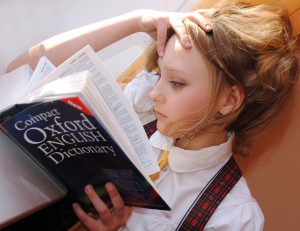 The author of one of my textbooks must be a friend of the magniloquent (see below) Conrad Black, or maybe a contributor to the harder levels of FreeRice.com. I say that because the text is sprinkled with so many obscure, unusual, “look how smart I am” kinds of words.

Here, for your amusement or perhaps horror, are some of the ones that drove me to the dictionary:

My point is that not many people read with a dictionary close at hand, nor do they want to. (Lots of people don’t even read these days, but that’s another issue!) I don’t usually look up a word right away but keep a running list to check later only because I am such a word nerd. But really, it’s kinder to your reader to pick a word that’s more familiar and more easily understood without a dictionary.

(While checking the link to FreeRice.com, I had to stop and play; made it to level 48 and 1,500 grains of rice donated before forcing myself to stop!)

Photo by libellule789 and Pixabay.

« Corporatespeak for ‘axed’ doesn’t hide the truth
Where are the proofreaders? »