An unpaid bill tells more about you than you think 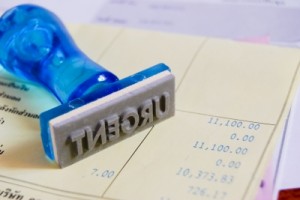 In two short weeks, I will encounter a milestone, of sorts, not seen in 21 years of independent business: an invoice that is one year past due.

In most cases like this, you’d write off that invoice as something that never will get paid. Half of me is resigned to that fate. Yet the other half has this silly belief that because the debtor is a fellow independent, somehow, even one year later, I will be paid.

We’ve corresponded about it a couple of times over the (almost) year. Oh, no, she hadn’t forgotten. Oh, the invoice got lost in a move; could I resend it? Oh, yes, the cheque would be in the mail that very week. I just sent one last note with a copy of the invoice marked “past due,” expressing the faint hope that it might get paid before the one-year mark.

The money isn’t a lot, but that’s not the point. What is important is an independent relies on his or her reputation, and every day, that reputation is affected by the assumptions and judgments people make about us based on how we act. It doesn’t matter whether we are doing something for free or for payment, as a volunteer or as a paid employee. People are paying attention. Do we do what we say we will? Do we respond immediately, eventually or not at all? Are we trustworthy, honest, organized, efficient?

How we act doesn’t just affect what people think of us; it also affects how willing people will be to recommend us to others. If we can never meet a deadline or we don’t update clients when we run into problems, they’ll notice, and they’ll think twice about giving our names to someone else. Frankly, they’ll also think twice about hiring us again. So that’s something independents need to watch carefully.

In this case, maybe the debtor was waiting to get paid herself before paying me; that’s not how I work, but I’ll throw that out there as a possibility. If so, the missing piece was keeping me posted on her attempts to get paid, or a message that she was writing the whole thing off and her apologies for bringing me in. Pretty simple communications between communicators, which did not happen. That tells me something.

Have you had an experience like this? How did it end? What did it tell you?

Postscript: I was eventually paid.

(More about the importance of referrals to independents.)

« In praise of women on International Women’s Day
Want people to do what you ask? Explain why »