Leave it to the Brits to celebrate bad writing about sex 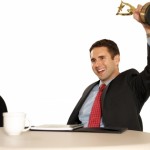 In case you haven’t heard of the Bad Sex in Fiction award, it was created in 1993 by the late Auberon Waugh, former editor of the Literary Review magazine. Its purpose was to draw attention to – and discourage – “the crude, tasteless, and often perfunctory use of redundant passages of sexual description in contemporary novels.”

The latest winner was David Guterson for his fifth novel, Ed King, a modern rewrite of the story of Oedipus. The author of Snow Falling on Cedars earned the “most coveted and dreaded literary prize” for an “over-reliance on coy terms such as ‘family jewels,’ ‘back door’ and ‘front parlour.'” The Guardian reports that Guterson wasn’t able to be there in person to accept his award of a plaster foot but “took his triumph in good spirits.”

« No moustache, no money? IBD research needs funds, too
5 business lessons learned at the spaaaah »