Thoughtless words do more damage than you know 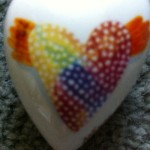 Can a heart ache with sadness and swell with pride at the same time? Yes, especially if your son writes a wrenching, powerful piece describing what it was like growing up a gay sports fanatic.

Matt came out to family and friends a few years ago, which already took courage. This post was an online coming out, of sorts, that puts his story out to the world. So far, response has been tremendously supportive.

I’ve shared Matt’s article on Facebook and Twitter (and here) because I think it’s a moving, well-written piece that deserves a look. I also hope, as Matt does, that it will resonate with others. As he says,

“Maybe if I read something like this when I was younger I wouldn’t have felt so alone and scared, and maybe I could have realized sooner that coming out, no matter how difficult, was the only way to live a happy, healthy life.”

Please read the post. And if you know of anyone who still casually throws around phrases like “that’s so gay,” please tell them how hurtful those words are.

And it wouldn’t hurt to support the You Can Play Project, either (“Gay athletes. Straight allies. Teaming up for respect”).

« Yes, it’s another ‘lessons learned from’ post!
The best of the Red Jacket Diaries so far this year »