Make better decisions by throwing away what you think you know 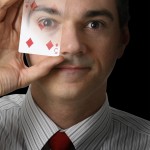 You can’t necessarily trust your brain.

As magician/speaker Dan Trommater told IABC/Toronto’s Professional Independent Communicators at a meeting on Nov. 6, your brain sometimes fills in the blanks when you make assumptions. It also shuts off when you come up with the first answer to a problem, passing over what may be perfectly good ideas.

Dan dazzled the group with a trick that involved borrowing a $20 bill, folding it into a tiny package and making it disappear. He then cut open a lime to reveal — tada! — the same bill. After asking the audience for theories on how he did it, and just how strongly people believed their theories, he revealed that there were at least 10 possible methods.

“Are you making a decision based on theory-based evidence, or is it your brain filling in the gaps?” he asked the group, adding, “Throw away what you think you know.”

Dan also led an exercise to help us go beyond the first response to a problem. With a little prodding, we came up with dozens of practical, impractical and downright weird options.

“It’s human nature to ‘solve a problem’ and move on, but you leave a lot of good ideas behind,” Dan explained.

Some other points Dan gave us to ponder:

As a reminder to shift our perspective and pay attention to the tricks our brains play on us, Dan handed out a card with an image of two tables. Although one appeared square and the other a rectangle, placing a red magnet over each in turn revealed both were identical. (See this illusion by Roger Shepard and other illusions by Al Seckel that show how we mis-think. “Optical illusions are as good as magic,” Dan says.)

He shared another reminder that what we think is “obvious” isn’t necessarily true, with the help of volunteer Janna Stam. From her perspective, she saw the wonder and magic of the cut rope trick. From the audience perspective, we could see some of the trickery.

“What is truth or magic for one person is clearly different for another,” Dan said. “It all depends on your perspective.”

Did you attend the meeting? What did you take away from the presentation? Please share in the comments below.