Have some fun with collective nouns 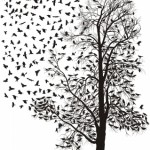 A large flock of crows swooped overhead as I walked the dog one day. Although it was early morning, my brain dimly recalled the official name is a murder of crows, in the obscure naming convention of “collective nouns.”

I looked up collective nouns, and discovered that the first ones were typically assigned to groups of animals and birds. According to the Oxford Dictionaries, a murmuration of starlings, parliament of rooks and unkindness of ravens can all be traced back to the fifteenth century.

(Want to see a murmuration of starlings? Check out this 2010 video by wildlife cameraman Dylan Winter, or this 2011 video taken by artists Sophie Windsor Clive and Liberty Smith. Stunning!)

There are plenty of other collective nouns (here’s one list, and another), including the lovely exaltation of larks, ostentation of peacocks and charm of hummingbirds. Then there’s the more common pride of lions, swarm of bees and herd of elephants. I also quite like scold of jays, a hastiness of cooks and a lodge of beavers.

Who decides whether a group is a murder or an unkindness? Oxford gave a rather unsatisfactory answer, saying first, “No one,” as in no governing body. Instead, “today’s lexicographers are describers of English rather than lawmakers… English, then, evolves with its own momentum.”

If that’s the case, what’s to stop us from inventing our own collective nouns? Nothing! Oxford Dictionaries threw out a stack of librarians, or a groove of DJs. I thought a clutch of purses would be funny, or perhaps a snout of anteaters.

Have you got an amusing or appropriate collective noun? Let’s hear it.