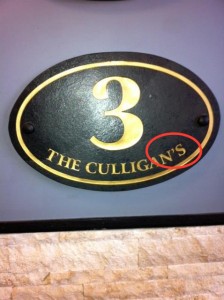 With December on the doorstep, we can look forward to lots of apostrophe abuse.

You know what I’m talking about. Where a simple “S” is required to indicate more than one item, an apostrophe is thrown in the mix.

Retailers are going to offer personalized items, such as signs like the one shown here that you can hang on your house or cottage/cabin.
Tip: If it has an apostrophe in it, DO NOT BUY IT. If you have more than one family member, the sign should add an S to your name, as in “The Culligans.” If the name already ends in an S, X, CH, SH or Z, add ES, says The Canadian Press Stylebook.

People are going to sign their Christmas cards with “The [family name]’s” instead of “The [family]s.” Again, more than one family member? Follow the rule above. (And note to anyone I know who might be guilty of this, I don’t blame you for following the b 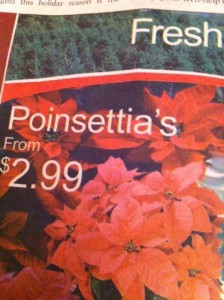 ad example set by so many retailers.)

Random items are going to get the “grocer’s apostrophe,” so called because so many grocery stores throw in an unnecessary apostrophe. As Grammar Girl says, an apostrophe indicates possession, so “Banana’s $1.50” is “as though a banana was carrying around pocket change.” (Read Grammar Girl’s full post for a funny song about apostrophe abuse set to the tune of O Christmas 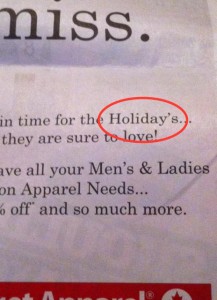 The holidays themselves are going to get an apostrophe for no reason, other than someone thought, “Does this need an apostrophe? I think so.” Must be following the grocer’s lead.

Trivial? Maybe. But as Jeff Rubin, founder of National Punctuation Day, has said, “It’s not the worst thing in the world if people don’t know how to properly use an apostrophe, but it does say something about them: that they don’t care to learn.”

Have you noticed any apostrophe abuse lately? What’s your favourite/most annoying example?

« Is Trump the new poster boy for plain language?
12 fun, quirky gifts for writers and readers »