Leads like flashlights and more great quotes about writing

While collecting bits of expressive writing, I also write down words of wisdom about writing itself. Here are a few examples:

“John McPhee calls the lead the flashlight that shines down into the story.” – Roy Peter Clark 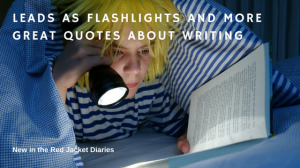 “Ledes are like Japanese haiku. They have to sing. They are the store window. If the reader doesn’t like the opening to your story, he or she isn’t about to venture inside.”
– Stephen G. Bloom

“Not a wasted word. This has been a main point to my literary thinking all my life.”
– Hunter S. Thompson

“Use examples. Use comparisons; nothing means anything except as compared to something else. Appeal to the senses. Be specific and concrete rather than general.
Don’t tell me – show me.” – Don Ranly

“Never use jargon words like reconceptualize, demassification, attitudinally, judgmentally.
They are hallmarks of a pretentious ass.” – David Ogilvy

“The writer’s job is to wow the reader. This is not easy. …[U]nless that story jumps out and grabs the reader by the throat within the first three seconds, pulling that reader into the story, then all the effort the writer has put into crafting the story is for naught.” – Stephen G. Bloom

“Words — so innocent and powerless as they are, as standing in a dictionary, how potent for good and evil they become in the hands of one who knows how to combine them.”
–  Nathaniel Hawthorne

“The writer’s duty is to make important things interesting to the reader. Important stuff – if tedious – will drive readers away. So spice up those Brussels sprouts.” – Roy Peter Clark

“If it sounds like writing, I rewrite it. Or, if proper usage gets in the way, it may have to go. I can’t allow what we learned in English composition to disrupt the sound and rhythm of the narrative.”
– Elmore Leonard

What’s your favourite quote about writing? Do share in the comments.