Life is fragile, so don’t waste it 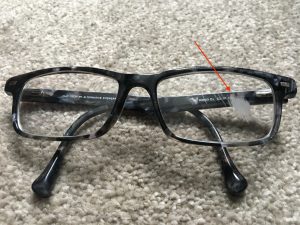 So says Katie Hawkins-Gaar, a writer and journalism consultant…and young widow. Her husband Jamie died in 2017, collapsing less than a mile from the finish line of a half marathon and dying of a rare condition. He was just 32.

Katie writes moving articles about “facing life’s ups and downs” in a weekly newsletter called My Sweet Dumb Brain. In her most recent article, where I found her line about life, she talks about why we should never waste an opportunity to “get up and run and scream,” to be the most authentic version of ourselves we can be.

I’ve recently had a series of sharp reminders myself about how life changes in a flash:

Now I’ve joined the club in having something happen out of left field. I was getting out of a car and my foot slipped, depositing me face-first on the pavement. Through some miracle, I didn’t break anything – not my leg, my nose, not even my glasses (despite the scrape shown in the photo). I certainly did rattle my brain, spent the night in Emergency and ended up with cuts and scrapes and bruises. As my husband says, my face looks like I’ve been in a mixed martial arts fight. (You should see the other guy!)

I like to think I already seize my chances to get up and run and scream, to go places and do things and be myself. Once the cuts heal, the bruises fade and I get new glasses, I plan to keep it going.

I hope you will, too.