‘They’ gives more options to count people in 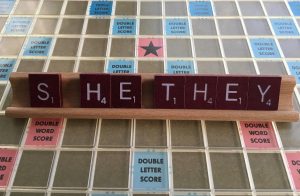 A peek under the blog “hood” shows that a post about looking for a gender-neutral option for man-hours is one of the most-read on my blog. I’m clearly not the only one who has looked this up! (Long story short, try work-hours or staff-hours.)

Women are sometimes accused of overreacting when we object to words like man-hours. But here’s why we object:

“When they read the words ‘man’ or ‘he,’ people of all ages tend to picture males,” says Words That Count Women In, produced by what’s now called the Ministry of the Status of Women. Male-biased words suggest that only males can perform certain work or hold certain jobs. Women are left out.

Similarly, using he or she (or he/she) leaves out transgender and gender fluid people, some of whom reject traditional pronouns.

I know reactions are mixed to this use of ‘they,’ but it has particular value if you feel strongly about making sure the language of your business counts people in. Being named the word of the year for 2019 by Merriam-Webster recognizes that they is now acceptable instead of he or she as a gender-neutral singular pronoun. You can use it for someone who doesn’t identify as either male or female, or someone whose gender isn’t known or isn’t important in the context of what you’re writing.

Still, some people don’t understand this use of they. As Merriam-Webster sums it up, “If you’re someone who has a binary gender (that is, who identifies as male or female) and you’ve never encountered the nonbinary they before, it may feel a little weird. Or you may think it’s unnecessary.“

As with man-hours, saying an alternative is unnecessary, or looks funny, or someone doesn’t like it isn’t a good reason to avoid gender-neutral language. “As we move towards a more equal, tolerant world, even little changes like inclusive language can help society as a whole progress,” says Oliver Featherston in CEO Magazine.

Beyond using “they” as necessary, take a look at the other words in employee handbooks, presentations, newsletters and other communication. Do they reflect a diverse workforce with words that count people in, not out? Do they refer to a spouse or partner rather than husband or wife in a benefits document? Or does a call for employee help ask them to staff a booth rather than man it?

Here are some options for the workplace:

What other inclusive words am I missing? Are you using the singular they? Is a term like man-hours still in use where you work? Please share your experience in the comments.

This post builds on the content of a past issue of my newsletter, Wordnerdery. The newsletter is a quick once-a-month read about words, effective/expressive writing, newsletters and more. Are you a subscriber yet? If yes, thanks for reading! If not, you can sign up right now. In keeping with Canada’s anti-spam laws and just plain good manners, you can easily unsubscribe any time.

« ‘The cooling power of a cat yawning’ + more metaphor magic (Wordnerdery)
Life is fragile, so don’t waste it »