34 ways to kick ‘unprecedented’ to the curb (Wordnerdery) 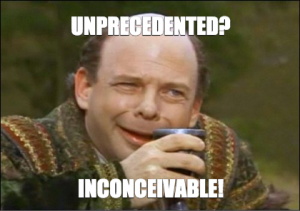 No doubt you’ve lost count of the number of times the word “unprecedented” has come your way in the past few months. It’s a go-to word for newspaper headlines, concerned emails and earnest messages from CEOs, marketers and politicians.

Google Trends shows little interest in the meaning of “unprecedented” from 2004 until a brief time in September 2019. Then the term spiked in January 2020, surged again in March and hit a peak in late April.

Thankfully, the use of unprecedented is dropping off, but I’ve run across so many examples, it’s clearly not going away anytime soon. Here are some of the examples I’ve run across in just a couple of weeks:

We get it. Life is anything but usual in a pandemic. But don’t you wish people would change it up sometimes? Here are some options:

For unprecedented as never before seen:

Which one is your favourite? Do you have any other brilliant options? Let me know in the comments.

This post first appeared in the July issue of my newsletter. Wordnerdery is a quick read about words, effective/expressive writing, newsletters and more. Are you a subscriber yet? If yes, thanks for reading! If not, you can sign up right now. In keeping with Canada’s anti-spam laws and just plain good manners, you can easily unsubscribe any time.

« What’s the best length for my e-newsletter?
Like a pair of ‘90-pound chicken nuggets’ and more expressive writing »