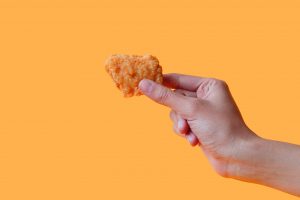 Do you want to explain something, make a point or maybe just spark a laugh? Give readers and listeners a shortcut to understanding by reaching for similes, which use “like” or “as” to show how two things are alike. (Metaphors do the same thing without using “like” or “as.”)

I’m always on the lookout for examples, and here are some I particularly liked:

“They’ve spent the morning in their barn, under a heat lamp, like a pair of 90-pound chicken nuggets.” – Katie Daubs in the Toronto Star (remember Toronto’s escaped capybaras, hiding out in High Park?)

“It was during the third of these collisions, starting about 470 million years ago, that the Appalachians were first pushed up (like a rucked carpet, as the analogy nearly always has it).” – Bill Bryson, A Walk in the Woods

“Search engine optimization is dead. Or at least it is as you knew it from the two-thousand-and-lates, when you were advised to cram keywords into a headline like a clown car dictionary.” – Ren LaForme, Poynter

“Avoid endings that go on and on like a Rachmaninoff concerto or a heavy metal ballad. Don’t bury your ending.” –  Roy Peter Clark in Writing Tools

“Five million years ago these mountains were lifted along the San Andreas Fault, which tracks like the ragged spine of some prehistoric beast some eight hundred miles through California.” – Sue Grafton, Y is for Yesterday

“The radio transmitters, which weighed about as much as a raindrop, were carefully glued on the bugs’ undersides kind of like fanny packs, Knight said.”– Kelly Geraldine Malone, The Canadian Press

“Like a dance party that technically starts at nine but doesn’t really get going until one in the morning, there’s a long lag between when stinkbugs show up in a new place and when their population booms. – Kathryn Schulz in The New Yorker

Where can you find ideas? Read, read, read – or listen, listen, listen to – newspapers, magazines, books, music. Pay attention when someone is explaining or describing something. Think about how something sounds, looks, tastes, smells or feels. Look for parallels in current events, your daily life, sports, your family.

Have you seen any examples of similes that turned the lightbulb on for you? Please share in the comments. I’m always adding to my collection!

Related reading:
How analogies encourage understanding and action during COVID-19
How songwriters like Chris Stapleton use expressive writing

« 34 ways to kick ‘unprecedented’ to the curb (Wordnerdery)
Boring topic? Here are 3 tips to spin your ‘straw’ into gold »