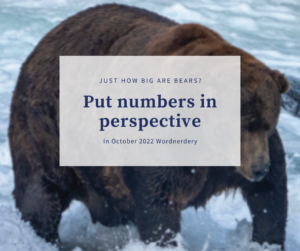 Brown bears are big. I mean, BIG. You probably have to guess at the size, but would you guess “seven times the average American adult”?

It also shows the value of putting big numbers into perspective.

The October issue of my newsletter, Wordnerdery, looks at some of the comparisons used to show just how big the Fat Bear Week contestants area and how much they eat. I also share some other terrific analogies I’ve run across. Have a look and let me know in the comments if you have a better appreciation of bear size or if you’ve found any other interesting, helpful or just plain funny comparisons.

Wordnerdery is a quick read about words, effective/expressive writing, newsletters and more. Are you a subscriber yet? If yes, thanks for reading! If not, you can sign up right now. In keeping with Canadian and American anti-spam laws – and just plain good manners – you can easily unsubscribe any time.

« More writing tips you might have missed in ICYMI, Oct. edition
Don’t clog your copy with too many abbreviations »