Don’t clog your copy with too many abbreviations 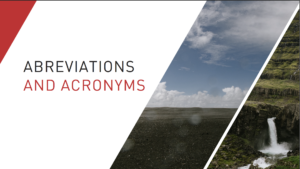 “Text studded with abbreviations is hard to read and unsightly,”  says The Canadian Press Stylebook. “Avoid when an option exists.”

It’s true you’re being kind to your reader when you explain abbreviations and acronyms.* But too many is, well, too much.

“Canada is the sixth-largest donor country on the Organisation for Economic Co-operation and Development’s (OECD) Development Assistance Committee (DAC). In 2021, Canada spent US$6.3 billion (current prices, according to OECD preliminary data) or 0.32% of the country’s gross national income (GNI) on official development assistance (ODA).” – Donor Tracker

Weren’t your eyes glazing over even before you hit the second abbreviation? Beyond the multiple bracketed abbreviations and an aside, both sentences are well over the average 14 words best for understanding. The Hemingway App gives it a grade 16 reading level; grade 9 is best for easy reading. Here’s how that looks, if you’re curious, with red meaning “very hard to read”:

Here are some of the Canadian Press (CP) guidelines:

1. Spell the word or phrase out in full the first time you use it, then give its abbreviation in brackets if necessary.

2. If you don’t plan to keep using the abbreviation, don’t use it.

3. For both ease of reading and variety, use a general term the second time you mention it. In the example here, you might say “the committee” instead of “DAC.”

4. Try not to start a sentence with an abbreviation.

5. If you must use abbreviations, try not to pile them all into one or two sentences. Four in two sentences is too much.

6. Use only abbreviations and acronyms that are familiar to ordinary readers. Example: CBC, BBC.

7. Abbreviations that have become household terms don’t need to be spelled out. Example: RCMP, CEO.

CP’s American counterpart, Associated Press (AP), says it should be obvious what an abbreviation stands for on second reference or you shouldn’t use it. Example: You don’t have to say “Hewlett-Packard (HP);” we know who you’re talking about when you switch to “HP.” With multiple words, though, this can make you scan back to see what it means. Or is that just me?

* Acronyms are abbreviations pronounced as words:

There are plenty of CP and AP style rules, which you might or might not incorporate into your “house” rules. What it comes down to it keeping the reader top of mind.

“The main thing is clarity,” said James McCarten, CP Stylebook editor, in a recent webinar about changes in the latest  CP’s Caps and Spelling book.