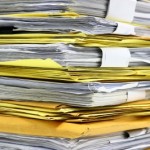 My car insurer claims it is working on “greening” its operations, and not a moment too soon. I’m drowning in paper.

True, I laid a number of changes on the company over the past two months. I bought a new car that had to be added to my existing insurance policy. I had to keep the old car on the policy until it was sold, bumping it to #2. Around the same time, Son #2 got his full driver’s license, so had to be officially added to the policy. I also asked that they make Son #2 “occasional driver” and Son #1 “secondary driver” because they had the reverse. Then I sold car #2.

But even though the various representatives I spoke with each time KNEW the other changes were coming, they still mailed me a paper confirmation and “change endorsement” every time. That’s a cover letter and four or five sheets of paper. And they mailed two credit notes; one is a rebate for the month left on car #2’s insurance, now cancelled, and I’m not sure what the other one is for. You’d think in all that paper, there would be an explanation.

Sure, I needed the new insurance card that listed both cars, and then a new one with just the new car. But the final thing I expected never came. That’s the renewal listing just the new car, detailing the premium components and showing “here’s what this all means to you, Ms. Horner.” You know; here’s how much you have to pay for your insurance for the year. Because it’s due July 20.

So I called my friends at the insurance company again today. Asked how much I owe. The fellow told me, and seemed surprised that I wanted the paper detailing how they came up with that number. He offered to e-mail it, which would have been perfect; I wondered why they didn’t e-mail all the other papers. Except what he e-mailed was just the “Automobile Insurance Confirmation.” When I pointed that out, he said they would mail the documents.

Sigh. Probably I’ll get four or five sheets of paper, including new insurance cards that I don’t need.

So here’s my advice to companies that wonder how they can get rid of some paper: