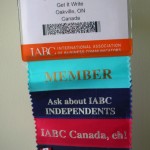 On Dec. 19, IABC held two webinar-type Q&A sessions for members to ask questions about the association’s new strategy. You know, the one that resulted in a “restructuring” that laid off half of its 32 staff members on a Friday afternoon.

I’ve seen words of support from some members saying the restructuring was “about time,” and that may be so. And let me say that I just renewed my membership for another year. IABC is the first place I turn for networking and professional development. I am active in my local chapter.

However, many of us are critical of the way the whole process was handled. As several people on a LinkedIn discussion group agreed, if this was an accreditation portfolio project or a Gold Quill entry, it would get a zero.

So the 70 or so members who were on the first call listened politely as IABC’s executive director Christopher Sorek and board chair Kerby Meyers fielded questions. Here are some of the points I took from the call:

Accreditation: Several of us asked for specifics on why the existing program was called “unsustainable.” The answer was that each candidate required 17 hours of volunteer time to process from application to accreditation, and it was a money-losing proposition. Work is underway to make the process more efficient, with the help of a consultant (Michael Hamm). There have been “preliminary discussions” with PRSA about possibly coordinating accreditation, or “certification” as seemed to be the preferred term.

Current ABCs: Asked “What happens to currently accredited members?”, Kerby (I think) skated around a bit, saying it was a question to be discussed within the accreditation committee and they haven’t gotten to that point yet. There was some reassurance later that “the ABC does not go away,” but still, that first answer was odd.

Going digital: A consultant is being used for the move to greater digital content, a San Francisco-based outfit called Extractable. Substantial changes are planned for the website, both in how information is presented and in how members will access it.

I was glad to hear:

I wasn’t so glad to hear:

A recording of the morning and afternoon calls has now been posted, in case you missed it, and IABC just posted a summary. And you can also see what IABC members (or former members) Robert Holland, David Murray and Russell Working think about the situation. This just in: IABC Edmonton chapter president Justin Archer addresses the issue too. Smart!

What do you think?

« Friday fun, Christmas version
The best of the Red Jacket Diaries in 2012 »