Is it curtains for the ‘full stop’? 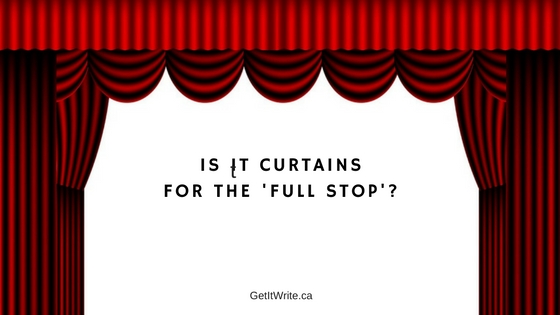 “[P]unctuation marks are the traffic signals of language: they tell us to slow down, notice this, take a detour, and stop.”
– Lynne Truss, in Eats, Shoots & Leaves

It’s almost National Punctuation Day (Sept. 24), that “celebration of the lowly comma, correctly used quotes, and other proper uses of periods, semicolons, and the ever-mysterious ellipsis.” When founding this celebration, Jeff Rubin surely didn’t foresee the dizzying fall from grace of the period, or full stop.

At one time, the period offered a “firm presence, helpful indication to breathe when reading aloud,” all pointing towards “a character that knows it’s the boss,” according to University of London visiting lecturer Poppy Corbett.

That’s all changed, says The New York Times, thanks to millennials and the “punctuation-free staccato sentences” they favour. The trend is “fueled by the freewheeling style of Facebook, WhatsApp and Twitter.”

Now, with the rise of texting and tweeting, every character is precious. Punctuation is seen as unnecessary, and is quickly tossed aside (along with proper spelling). Worse, periods are viewed as hostile, or at least less sincere.

Seriously. Mashable quotes a 2015 study at Binghamton University in New York, where students rated text responses that included periods ­– like “Yup.” and “Sure.” – as less sincere than those without. The article also claims that “It’s no longer noticeable when someone doesn’t use a period at the end of a sentence because we’re just so accustomed to not seeing it.”

Sure, leave periods off text messages. Those little text boxes effectively end a message anyway. On Twitter, too, a full stop often gets left out to save space. But if you want to see how annoying the lack of periods can be elsewhere, look at that New York Times article. Notice, too, that author Dan Bilefsky has to use a question mark or paragraph break where there’s no period.

Clearly, the period has a place helping readers know where to stop, or at least pause. There’s nothing insincere about that.

How do you feel about losing the “firm presence” of the full stop?

« How to harness the power of the inbox
In my Sept. newsletter: How often to publish »