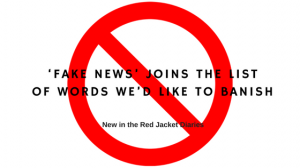 The wordsmiths at Lake Superior State University in Michigan are at it again. Among the words they’re trying to banish for “Misuse, Overuse and General Uselessness” are fake news, gig economy, impactful and unpack.

As an unnamed spokesperson said when releasing the 43rd annual list, “We’ve drilled down and unpacked tons of pre-owned words and phrases deemed impactful by hundreds of nominators during 2017.”

The tradition began on January 1, 1976 with the late W. T. Rabe, then a PR director at the university. After a New Year’s Eve party, he and other faculty and staff published the first list of their own pet peeves. That list included macho, scenario and at this point in time.

Since then, word nerds have nominated tens of thousands of words and phrases. The words are always released on New Year’s Day, traditionally a slow news day.

Sadly, making the list does not actually banish awful jargon and overused terms. Incentivize has been on the list since 1983, utilize since 1987 and win-win since 1993, and they Will. Not. Die.

Here are some of this year’s top banned words:

See the full list here, where you can check out previous words or submit your own.

Which word would you nominate for the next round?

Related reading:
Post-truth, on fleek (shudder) and Dad bod made the list last year
Selfie, hashtag and twerk have also been nominated