8 ways to reel in your reader 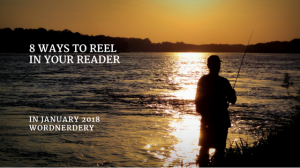 Novelists, journalists and corporate communicators have this in common: We all want readers to read our writing. An effective headline sets the stage, but how we open the story or article invites readers in, or sends them scurrying for the door.

How do you start? Here are eight ways:

1. Find the most interesting point

“News writers have been trained to decide what in the story they most want readers to know,” says Don Ranly, professor emeritus of the Missouri School of Journalism. “Now you must decide what is most likely to interest the readers.” What will catch the attention of your readers? Start there.

Example: “Nature’s programming is strong. After the first rainfall following spring thaw, Jefferson’s Salamanders emerge from underground dens, determined to migrate to the ponds where they were born to lay their eggs.”

“Find a beginning that appeals to the senses, a detail readers can see, hear or smell,” says Roy Peter Clark, writer, editor and writing teacher.

Startling statistics can make a great lead, says writing coach Ann Wylie. Go easy, though; “When writing with numbers, limit yourself to three numbers per paragraph,” she says.

Example: “On an average day, nearly 3,500 vehicles turn off Highway 63 at the Suncor Oil Sands entrance. For employees and contractors, that means gridlock as early as 5 a.m. on Fort McMurray’s one major highway.”

4. Determine what’s in it for the reader

“The who, what, when, where and why are important, yes, but only to get to the most important question, the so what?” says Don Ranly. Ann Wylie suggests this formula: X (users) who have struggled with Y (problem) will now be able to Z (benefit), thanks to A (product or service).

Example (from Ann): “The 2,000 commuters who now spend an hour each day driving from Sunrise Beach to Osage Beach will soon be able to make the trip in 15 minutes. The reason: a new, $24 million bridge that Community Transport Corp. will build this summer.”

5. Find who was involved with or has been/will be affected by this issue/topic

“Whenever possible, raise the curtain on a human actor and human action, not a juiceless stage setting,” says the Associated Press Guide to Newswriting.

Example: “Dave Dragert is an inventor and tinkerer, often to his wife’s dismay. At work, however, the chemical engineer and research product specialist finds his creative thinking welcome.”

6. Avoid beginning with “it”

“Unless [the] story jumps out and grabs the reader by the throat within the first three seconds, pulling that reader into the story, then all the effort the writer has put into crafting the story is for naught.” Says Stephen G. Bloom, professor of Journalism at the University of Iowa. “It” doesn’t do it.

Example (from Stephen): “Bad: ‘It was raining hard.’ Better: ‘The rain came down like a sonofabitch.’”

7. Begin the story in the middle of things

Pique the reader’s curiosity by plunging right into the action. This technique is called in medias res, a Latin term meaning “in the midst of things.”

Example: “Monico Abreu vividly remembers Barrick employees being met with stones and knives during a visit to a local community near the Pueblo Viejo mine in the Dominican Republic.”

8. Think about where your story or article is going to end

“I always know where I intend to end before I have much begun to write,” says John McPhee, a Pulitzer Prize-winning American writer considered one of the pioneers of creative nonfiction. Have your ending echo the lead.

Example: “Baking a delicious loaf of bread has more to do with artistry than technology. But dealing with a swift rise in demand for a loaf that’s the greatest thing since sliced bread? That’s a job for high tech, as La Brea Bakery will attest.” Ending: “He adds, ‘Most importantly, the [technology]…will allow us to continue to grow our business without interruption.’ For bread lovers across the country, that’s good news, no matter how you slice it.”

As with many aspects of writing, look for and learn from people who write engaging openings that reel you in. As Roy Peter Clark says in HELP! for Writers, “Collect examples of good beginnings. Read them for inspiration.”

What other advice would you give for writing an effective opening? Do you have some terrific examples? Please share in the comments.

This post first appeared in my newsletter, Wordnerdery, which is a quick read about words, effective/expressive writing, newsletters and more. Are you a subscriber yet? If yes, thanks for reading! If not, you can sign up right now. In keeping with Canadian and U.S. anti-spam laws, you can easily unsubscribe any time.

Related reading:
Leads like flashlights, and more great quotes about writing
Find the heart of your story with these questions